Jack and The Beanstalk 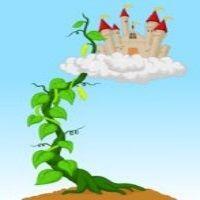 At last the giant put everything back in the bags again, dropped his chin on his chest and fell asleep. Jack crept very, very quietly from the closet and approached the table. All at once, a little dog under the giant's chair began to bark furiously. The giant sleepily opened one eye; Jack seized the bags and ran! So he reached the beanstalk in safety and was soon back again in his room. If his mother was glad to see him before, she was twice glad to have him safely returned this time, and they found themselves now very well off indeed.
Still, all this wealth and comfort at home did not make Jack wish to remain there at ease and leave his father to shut up in the dungeon. On the longest day of the year, he arose as soon as it was light and climbed the beanstalk. He arrived at the giant's house in the evening and found his wife standing at the door. This time her manner was rougher than ever. Her husband had been very hard on her after the disappearance of the treasure. It was difficult indeed to persuade her to admit him.

But at last, he prevailed and was allowed to go into work and eat his supper as usual. When the giant came home, Jack was hiding in the copper kettle. The great bully was as ugly as ever, and began once more to roar: “Tee Fi Fo Fum, Methinks I smell an Englishman!" Then, notwithstanding all his wife could say, he searched in every nook and corner of the room. While this was going on, Jack held his breath. The giant approached the copper kettle and put his hand squarely on the lid. Jack thought he must surely be discovered, but no! The search ended here, and the bully sat quietly down by the fireside.
When supper was over, the giant commanded his wife to fetch him his harp. Jack peeped from under the copper lid and soon saw the giantess bring in the instrument. It was carved of gold and on the front was the figure of a beautiful woman with wings. Her robes flowed to the floor and ended in the form of a stand like a traditional harp. The giant put the harp on the table and when he said “Play!” it instantly played of its own accord. The music was so soft and melodious that Jack was filled with delight and felt very anxious to recover so great a treasure. But the giant's soul could find no pleasure in such harmony, so instead of listening to the music, he soon fell soundly asleep. Jack, at once climbed out of the copper kettle and seized the harp. He had no sooner done so, however, than it began to cry out, ''Master! Master!"

Jack thought this must surely awaken the giant, so he started to run away as before.

The lad was almost ready to drop it, when he suddenly felt that it was turning in his arms as if alive, directing itself by its wings, and pulling him along with it. Not toward the outer door did it go, but back, back into the house, toward the dungeons.

it kept repeating, and soon it dragged Jack to the very spot where he knew his father must be imprisoned.

it twanged louder than ever, and lo there came to the grating of one of the dungeons a white-haired old man in chains. "My harp! My Harp!" he cried. "Who bears you, hither?" Jack answered at once, "Thy son!"

"My son!" repeated the man with tears of joy. "My son!" As he spoke, he stretched his arms through the grating, and the Harp flew immediately into them.

'Harp! Harp! Play off my chains!'' he commanded. Such music as the Harp then played! The chains fell away from the old man's feet.

The Harp played again. Then the heavy door swung open, Jack's father passed through, and the two hurried down the gallery. But by this time there was a great commotion from the kitchen. The giant was now thoroughly awake and roaring for his harp. As Jack and his father ran out the great gate of the Castle, the giant was hot on their heels. They ran, and they ran! Behind them, the giant roared in a voice of thunder. Often he almost had them, but they clung to the Harp, and it helped them on with its wings.

At last, they came to the beanstalk. Jack and his father climbed quickly down. No sooner had they reached the bottom, than the giant appeared, shaking his fists at the top of the ladder above. Down, down he came, snorting and raging, but Jack called loudly for a hatchet, and when he was almost upon them, he laid his hatchet to the root of the beanstalk. No sooner had he done so, than of a sudden, the whole beanstalk shrivelled up and the giant burst like a monstrous bubble. Then Jack and his mother and father fell into each other's arms and rejoiced to be once more together.

As for the giant's wife, in the land beyond the beanstalk, she, without doubt, was glad to be freed from such wickedness and cruelty.