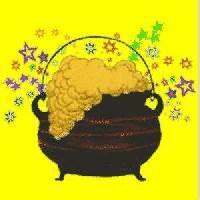 Once upon a time, a little girl lived with her mother in a small cottage, next to a large forest. They were very poor. At this time, many people were poor.

Each day, the mother travelled the long way into the city searching for work. Sometimes she helped someone wash clothes, sometimes it was someone who needed help to clean the house, but often she had to go home without having earned a penny.

Every morning, the little girl took her bucket and went into the forest to pick some blueberries, so they had at least something to eat. One morning the girl was tired and did not want to pick blueberries. She told her mother that she wanted to have porridge, as their neighbours ate almost every day.

“Little friend! They are rich and can buy rice, we cannot,” the mother said.

“Well then, I’m going into the woods to pick berries,” the girl said.

When she got to the woods, she heard someone calling,

She looked around but could not see anyone. After a while, she heard someone shout again. Now she saw a little grey old man sitting on a stone.

“Who are you, picking blueberries here in my forest?” said the old man.

“My name is Anna, and I usually pick berries here. I did not know it was your forest,” the girl said.

“Okay, you can pick berries here,” said the old man.

“I don’t want to pick blueberries, because I’m tired of eating berries every day. I want porridge, but we have no money to buy rice,” said the girl.

“Easily arranged,” said the old man. “Come back tomorrow and bring a pot, but it should be a nice pot. Do you have a good pot at home?”

“Yes, we do, but my mother probably won’t allow me to take it with me.”

Anna thought all day about what the little old man had said, but she did not tell her mother. The next day she went into the woods, and she brought the big pot. The old man was sitting in the same place as the day before.

“Do you have the pot with you?” said the old man.

The girl nodded and showed him the pot.

“It is good enough,” said the old man.

Then he picked up a dreadfully ugly and dented pot.

“Do you mean that we should trade and I’ll get the ugly pot instead? It’s impossible. Mother will become very angry and sad,” the girl said.

“You forget that this is a magic pot,” said the old man.

“Yes, but how does it work?” asked the girl.

“Listen to me very carefully!

“First, fill the pot with water. Then light the fire in the fireplace, put the pot on the stove, and say,

When the pot is full, say, ‘Please stop cooking porridge.’

“You need to say it just so! Do you understand?” said the old man.

The girl nodded and thanked him.

When the girl got home, the mother was there, so the girl poured water into the pot and put it on the stove, but she dared not make a fire in the fireplace, for the mother had forbidden her to do so. When the mother came home and saw the ugly dented pot, she wondered where it had come from.

“You found it in the woods?”

“It is a magic pot that can cook porridge with just water,” said the girl.

“Dear little girl, there are no magic pots,” said the mother.

“Well, that’s certainly a magic pot. I had to trade your new pot for this one with a little old man who lives in the woods,” the girl said.

“Oh, little girl, what have you done!”

“Please, Mother, light the stove and see what happens,” the girl said.

The mother sighed but did as the girl said.

Then something strange happened. The pot began to boil. It made more and more porridge until the girl said,

And the pot stopped boiling.

“Wow, it is really an enchanted pot. How happy I am. Now we need never be hungry again. Thank you, dear child,” said the mother.

“Well, it was lucky that I met the little man,” said the girl.

After that day, the girl and her mother could eat porridge as often as they wanted.