The Story of Pomperipossa 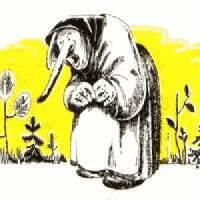 Once upon a time, many, many years ago, there was a horrible old witch named Pomperipossa. It’s not a very beautiful name, but it’s much more beautiful than she was. Can you imagine how she looked?

She had two small red eyes and a large mouth with only three teeth. Her hands were full of warts, and she had a big hump on her back. But the worst thing was her nose, for it was almost two feet long. She lived alone in a little house in the woods, but she was awfully rich. The house was built of sausages and hams, and instead of bricks, there were large pieces of toffee. So rich was Pomperipossa. But no one dared to visit her, not even a troll, because she was so terribly cruel.

When anyone came to see her, she would instantly turn him into a table or a bowl or something else. She was a very dangerous witch. Her biggest regret was that her nose got longer and longer each time she used her magic on someone. It was her punishment!

There was also a king of the country where Pomperipossa lived, and he had a little prince named Pipi and a little princess named Fifi. One day they were walking in the park, escorted by a marshal of the court who was so noble that he could only answer “Ah!” or “Oh!” to everything they said to him.

“I want to go out in the woods!” said Prince Pipi.

“Ah!” said the marshal, and he went with them.

After a while, they came to a swamp, and the marshal’s feet got wet because he had silk shoes.

“Oh!” he said and immediately turned back to go home to put on a pair of jackboots.

But before he left, he puts his finger on his nose and said,

He meant, “Wait here, Prince Pipi and Princess Fifi, until I get back, wearing my big jackboots!”

But the royal children did not understand him, so they went further into the woods. It was the same forest where Pomperipossa lived.

All birds immediately began to chirp,

But Prince Pipi did not understand the speech of birds. He said to his sister,

“Shall we go on an adventure? It’s so boring at home. I have six cents. How much do you have, princess?”

“Then you can cook. You can be my housekeeper,” said Prince Pipi.

And so they started on an adventure in the dark forest until they came to Pomperipossa’s little house, which was built of sausages and hams and toffee.

“Let’s eat supper!” said Prince Pipi, who was hungry, and he broke a huge sausage out of the house.

Then Pomperipossa stuck her long nose through the window and looked at them.

“Come on in!” she said immediately. “I’m your kind godmother. I will give you jam pancakes.”

Prince Pipi and little Fifi believed her and went in, even though they were terrified.

“Hm!” Pomperipossa said and looked at them. “I have not eaten roast goose in a long time...”

And so she turned the Prince and Princess into two small geese, who looked at each other, terrified.

“Marshal!” Prince Pipi wanted to scream in his agony.

But it sounded just like “Kakaka!” He could not speak any longer, just cackle.

“Ouch!” Pomperipossa screamed and hit herself on the nose.

Her nose had grown nearly one foot when she turned Pipi and Fifi into geese.

“That is just what she deserves!” screamed all the birds in the forest.

“Beware!” Pomperipossa shouted and shook her fist at them. “I will send my troll cat after you.”

“We should get help,” all the birds sang and flew off to ask the stork for advice.

The stork is the wisest of all birds, for he travels every winter to Egypt and studies hieroglyphics on the pyramids.

“Now you get to swim, my little geese!” said Pomperipossa and drove Pipi and Fifi in front of her with her big stick.

“It makes you delicious, and you will taste better when I fry you tonight.” And so she drove the poor prince and princess down to the lake.

“Ka ka ka!” they wailed, but they still had to go into the cold water.

“Are you saying ‘kakaka’?” asked Pomperipossa. “Maybe you mean ‘jam pancakes,’” she taunted them.

The enchanted geese had to eat tiny black tadpoles and wet grass – they were definitely not jam pancakes!

Pomperipossa stood on the beach and leaned on her long nose, which was now as long as her legs. Just then she heard a rustle behind her in the woods and turned around. It was the marshal, who had come back from getting his jackboots and since then had been anxiously looking for the missing royal children.

“Ha!” said the marshal when he saw the witch.

“Pa!” he said and pulled his long sword to chop off her nose. But Pomperipossa immediately turned him into an old crow, which anxiously jumped around on the beach and said “Kra, kra!”

“Yes, cackle on, you!” Pomperipossa laughed contentedly. “There is nothing that can free you from the curse unless you hear the most terrible screams in the world that you can imagine. That would turn everyone I have enchanted back into their true form again, and then I would turn into a stone. But let’s hope that this does not happen for a few million years yet,” said Pomperipossa and sniffed up two pounds of snuff.

“You would deserve it,” cried all the little birds, who had come back with the white stork.

“Stop teasing me. You’re making my nose burn from blushing,” snapped Pomperipossa and stuck her nose into the lake to cool it.

But she shouldn’t have done that. For at the bottom of the lake was a great crawfish, that had not eaten for three days. And the crawfish snapped at Pomperipossa’s long snout with its claws. And Pomperipossa screamed so terribly that she became blue as a plum in the face. But the crawfish did not release his hold. Then the witch cried even worse, and her screams could be heard all the way deep in Africa.

“These are the most terrible screams in the world that you can imagine!” said the stork.

And he told the truth, for no bird can lie. Flux and snags! Everyone’s enchantment was broken, and the small white geese became prince and princess again. The old crow, romping around on the beach, became the marshal, with orders, wig, sword and jackboots.

“What? Ah! Good!” said the marshal and grabbed Prince Pipi and Princess Fifi, one in each hand, and ran with them, as fast he could, through the forest back to the palace, where the king was waiting for them with a whip in his left hand and a big apple in his right hand. He was furious because they had been away for so long.

“Na!” said the marshal soothingly. And the king knew at once that the marshal meant that Pomperipossa had enchanted them and they could not help it. Then the king was moved, put the whip away and gave Prince Pipi and Princess Fifi half of the big apple each.

But Pomperipossa was transformed immediately into a large rock. You can see her yourself if you go to that lake, though she is now so overgrown with moss and shrubs that she looks like a small mountain. But once a year, on the day she was petrified, she turns into a witch again. And then the crawfish pinches her on the nose, and then she again, yells so terribly that it echoes in the mountains. But what day it is, only I know that and I’m not telling you, and it’s no good if you go out and look for it because if you do, your little nose is going to be as long as Pomperipossa’s – and that, I think, you do not want!