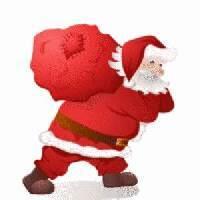 Deep in the forest was a small grey cottage. There was smoke coming from the chimney, and beautiful smells came from the window slot. It smelled like Christmas! It was Mother Christmas, who was about to bake gingerbread. She had several Christmas children who helped her. They were in an awful hurry, and that was not strange since there were only two days left until Christmas Eve – and then everything had to be ready.

– Why doesn’t Dad ever come? He has been in the Christmas workshop almost all day, said a small Christmas girl with long blond hair.

– You know how much he has to do. All the Christmas gifts must be ready for Christmas, but I think he’ll be here any minute now, said Mother Christmas.

Suddenly someone grabbed the door handle, and in came Father Christmas and three little elves.

– Oh, how it snows! This year we will have a truly white Christmas, said Father Christmas.

– It is good with a lot of snow because then it becomes easier for the reindeer pulling the sledge with all the presents, said one of the elves.

– He is a little boy who has been very ill, but he’s fine now, said Father Christmas.

– I’m done with all the presents. They should be wrapped, but we’ll do that tomorrow. Then I can get help from all of my elves, said Father Christmas.

– Now we’ll eat Christmas porridge, and then we go to bed, because it’s a long day tomorrow, said Mother Christmas.

– I will come and pick you up when it’s time for lunch, Mother Christmas said.

After five minutes, the door was ripped open, and in came Father Christmas and the elves.

– The Christmas gifts are gone! They shouted.

– Gone? What do you mean? Mother Christmas said.

– All the presents are gone. It has to be thieves who have taken them, said Father Christmas.

– You can ask the reindeer if they heard something, said Mother Christmas. (Santa Claus can talk to animals).

– I’ve already done that. They heard noises from the workshop, but they thought it was me, said, Father Christmas.

– What are we going to do? It’s Christmas Eve tomorrow, so we have no time to make new presents.

– I know what we can do. We go to the squirrel and ask if he has seen anything. He is so curious, so he knows most of what happens here in the forest, said the smallest elf.

– Good suggestion, Father Christmas said and pointed out three fairies who would accompany him.

Father Christmas and the elves sat on the sledge, and they took off at a furious pace. The reindeer ran as fast as they could. After a while, they arrived at the great tree where the squirrel family lived. No one had seen anything strange.

– If it happened at night, we could not see or hear anything because we were asleep. You’ll have to ask someone awake at night, said Mother Squirrel.

– I think you should ask the owl, said Father Squirrel.

– Where can I find her? Father Christmas said.

– If you go straight ahead and then turn left at the large pine tree, you will see giant spruce. There lives Mother Owl, said Father Squirrel.

After a little while, they were at the owl’s nest. The owl sat high up in the tree. They shouted at the owl, but she didn’t seem to hear them.

– Dad, can’t you see she’s asleep? said one of the elves.

– Then we have to shout louder, said Father Christmas.

They shouted as loud as they could.

– That’s an awful noise! What do you want? The owl said.

– That’s terrible! Does that mean that the kids won’t get their presents? Said the owl.

– That’s right, said, Santa Claus. Unless we find them.

– Wait a minute! I saw some strange people who went through here last night. They pulled a sledge loaded with things, said the owl.

– It was probably the thieves. Do you know where they went? Santa Claus asked.

– No, I do not for just then I saw a fat vole, which I caught. But there is a small brown house further into the forest where you will find some peculiar guys, so I’ve heard, said the owl.

Father Christmas thanked the owl and said they would try to find the cottage. After a while, they saw a small brown cottage.

– I will sneak up to the house and peer in through the window, said the oldest elf.

– Yes, do so, but be careful, because they might be dangerous, said Father Christmas.

The elf sneaked forward and looked in, but he could not see any thieves. However, he saw all the presents.

– Come quickly! There aren’t any thieves around, but I can see all of the gifts, the elf screamed.

All of the elves rushed into the cottage. There were no people around at all, but all of the presents lay scattered on the floor.

– I wonder where they are and what has happened, said Father Christmas. Now let’s collect all of the Christmas gifts and hurry back home.

When the elves came to the edge of the forest, they met the hare, who told them that he had heard a police car and at the same time had seen three people run as fast as they could in the opposite direction.

– There, we have enough explanation, said Father Christmas.

Do you wonder what happened to the children, if they got any Christmas presents? Well then, all of the kids got their gift on time, and everyone was very excited, especially little Adrian, who thought it was the finest sledge he had ever seen.

Do you wonder what happened to the thieves? No one knows because they have never been found again.