The writers of the stories

Inga-Lill Ottosson was born in 1942. She has been a Swedish teacher for 6-8 years old children. She now has retired after 45 years. During the years in school, she often told stories for the kids. Both old folk stories and tales she made up her self. After retirement, she has written down some of the self-made stories. She has also made the selections we have made among the old folk stories and tales that we have published here on this site with free stories for on-line reading.

Hans Christian Andersen ( Danish; often referred to in Scandinavia as H. C. Andersen; 2 April 1805 – 4 August 1875) was a Danish author. Although a prolific writer of plays, travelogues, novels, and poems, Andersen is best remembered for his fairy tales. Andersen's popularity is not limited to children; his stories called eventyr in Danish or "fairy-tales" in English, express themes that transcend age and nationality.

Andersen's fairy tales, which have been translated into more than 125 languages, have become culturally embedded in the West's collective consciousness, readily accessible to children, but presenting lessons of virtue and resilience in the face of adversity for mature readers as well. Some of his most famous fairy tales include "The Emperor's New Clothes", "The Little Mermaid", "The Nightingale", "The Snow Queen", "The Ugly Duckling", and many more. 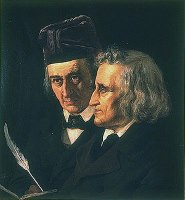 The Brothers Grimm (die Brüder Grimm or die Gebrüder Grimm), Jacob (1785–1863) and Wilhelm Grimm(1786–1859), were German academics, linguists, cultural researchers, lexicographers and authors who together specialized in collecting and publishing folklore during the 19th century. They were among the best-known storytellers of folk tales, and popularized stories such as "Cinderella" ("Aschenputtel"), "The Frog Prince" ("Der Froschkönig"), "The Goose-Girl" ("Die Gänsemagd"), "Hansel and Gretel" ("Hänsel und Gretel"), "Rapunzel", "Rumpelstiltskin" ("Rumpelstilzchen"),"Sleeping Beauty" ("Dornröschen"), and "Snow White" ("Schneewittchen"). Their first collection of folk tales, Children's and Household Tales (Kinder- und Hausmärchen), was published in 1812.

Charles Perrault (12 January 1628 – 16 May 1703) was a French author and member of the Académie Française. He laid the foundations for a new literary genre, the fairy tale, with his works derived from pre-existing folk tales. The best known of his tales include Le Petit Chaperon rouge (Little Red Riding Hood), Cendrillon (Cinderella), Le Chat Botté (Puss in Boots), La Belle au bois dormant (The Sleeping Beauty) and La Barbe bleue (Bluebeard). Some of Perrault's versions of old stories may have influenced the German versions published by the Brothers Grimm 200 years later. The stories continue to be printed and have been adapted to opera, ballet (such as Tchaikovsky's The Sleeping Beauty), theatre, and film. Perrault was an influential figure in the 17th-century French literary scene and was the leader of the Modern faction during the Quarrel of the Ancients and the Moderns.